On May 31, 1889, a flood in Johnstown, Pennsylvania killed over 2,200 people, the deadliest disaster in a single day of American history until September 11, 2001. Until the terrorist attacks on September 11, 2001, it was the United States’ largest loss of civilian life in a single day.. Located in the beautiful Alleghenies (part of the Appalachian Mountains), not far from Pittsburgh, Johnstown and its history are worth exploring. The scenery is stunning, the people are friendly, and the story of the flood itself is fascinating because it turns out that the flood was likely preventable–and perhaps even the fault of a bunch of wealthy guys whose names are still famous today: Andrew Carnegie, Andrew Mellon, and Henry Clay Frick.

The wealthy Gilded Age tycoons could be considered more than a little responsible for the chaos and destruction that leveled the town.

There are several sites of interest about the flood for visitors to Johnstown, and the easiest way to see them is to work backward from the site of the destruction to the cause. Start in downtown Johnstown at the Johnstown Flood Museum, which is in the former Carnegie Library, gifted to the city by Andrew Carnegie after the flood. The exhibits and the haunting (and Academy Award-winning!) short film at the museum will introduce you to him and the other wealthy Gilded Age tycoons who could be considered more than a little responsible for the chaos and destruction that leveled the town. 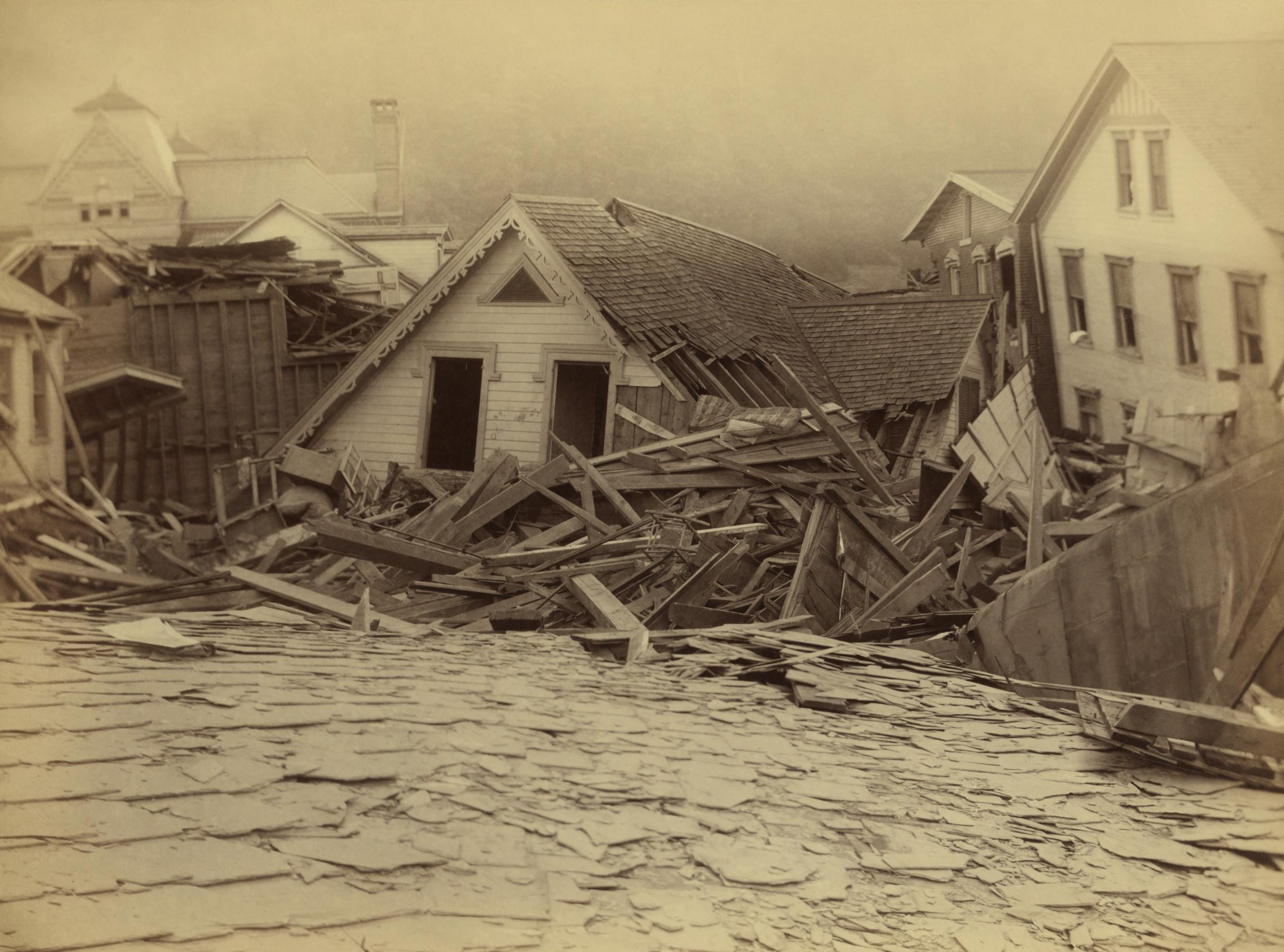 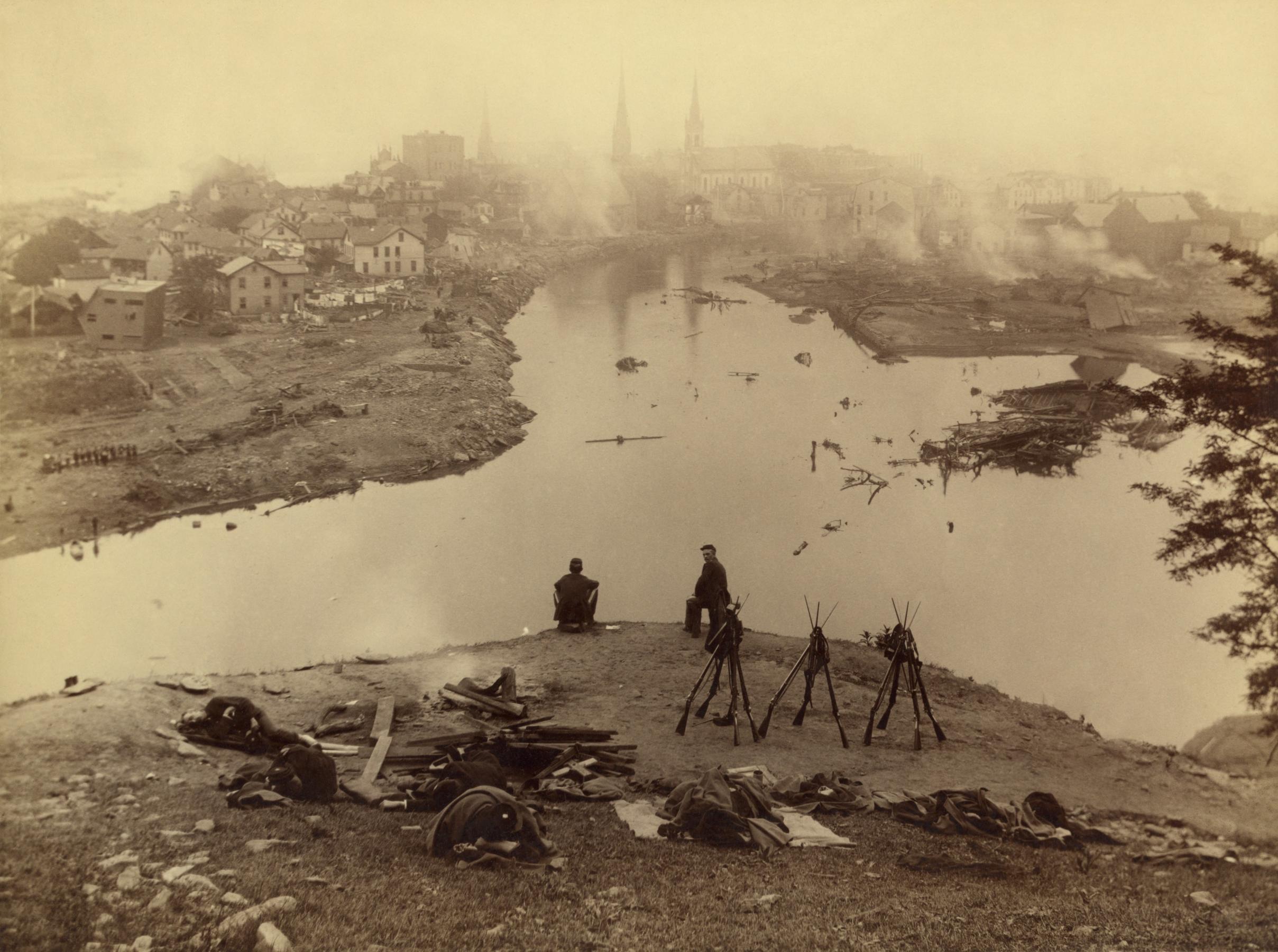 1. Ruins of houses after the Johnstown Flood, of May 31, 1889. The building is identified as the house of George Hamilton, Assistant Superintendent of the Cambria Iron Mills. 2. Military post on Kernville Hill after the Johnstown Flood, May 31, 1889. 14th National Guard regiment from Pittsburgh arrived in Johnstown on June 5, five days into the disaster.  Everett Historical/Shutterstock

They were members of the South Fork Hunting and Fishing Club, once a very posh, private, and secretive camp in the mountains above Johnstown. If you travel out of the city and up to the Lake View Visitor Center at the Johnstown Flood National Memorial in the Alleghenies, you’ll be retracing the general path the flood took. At the Memorial, you can watch another excellent film and learn more about the flood and Club. The South Fork Hunting and Fishing Club was built at the site of a former railroad reservoir and allowed members—mostly connected to either the Pennsylvania Railroad, Carnegie Steel, or both—to bring their families to enjoy the fresh air and beautiful vistas only a couple of hours from smoky, smoggy Pittsburgh, where their factories churned out the materials that welded America together.

The Club renamed the railroad reservoir “Lake Conemaugh” and used it for boating and fishing, relying on the South Fork Dam to keep the lake intact. But they didn’t maintain the dam well. As the museum exhibits teach, a dam shouldn’t be neglected, with its discharge drains allowed to clog, its holes patched with mud and straw, and its high breadth lowered for carriages to cross, but that is exactly what the Club members did. The disrepair of the dam was well-known; Johnstown newspapers in the 1880s repeatedly worried over what would happen when it finally gave way. 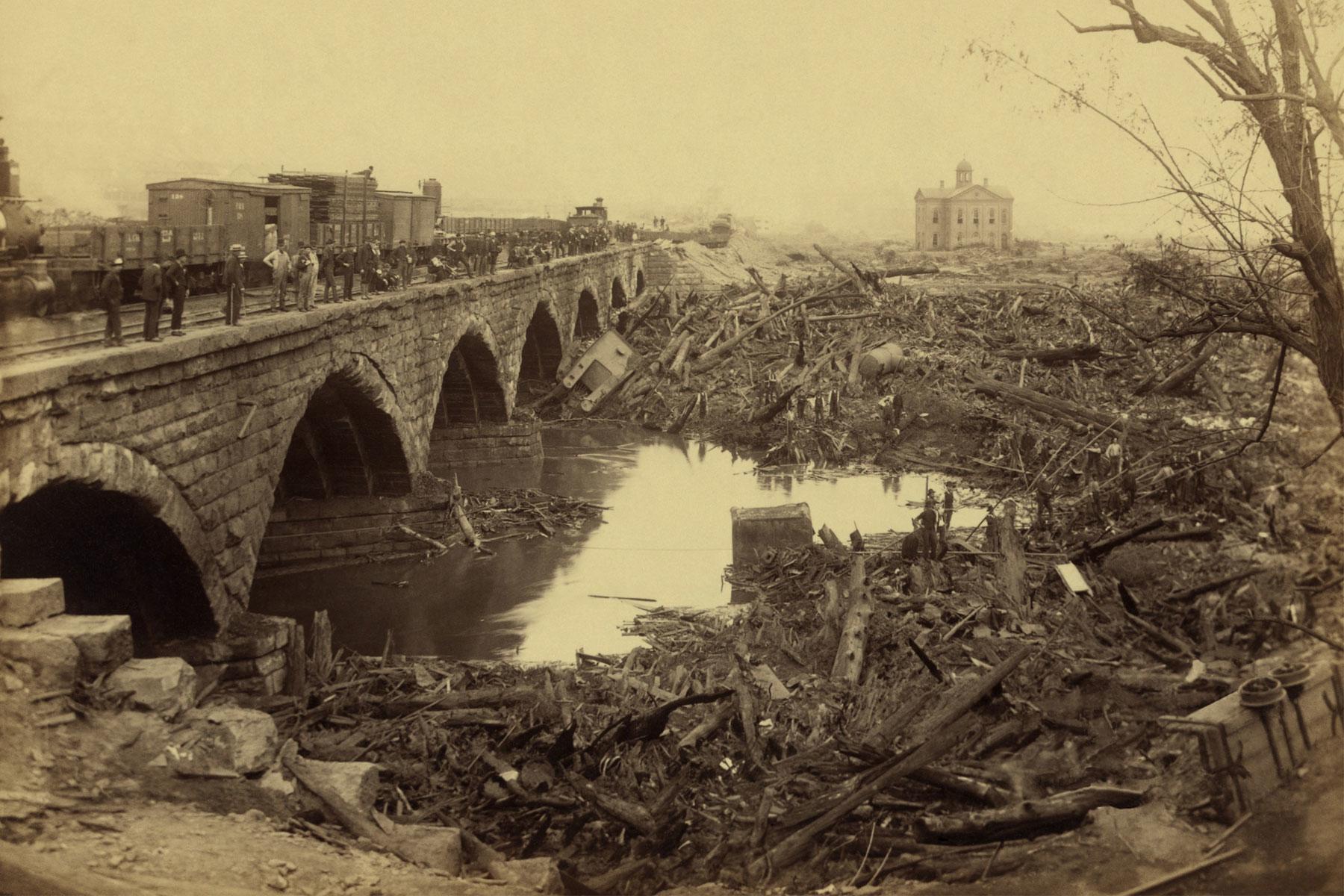 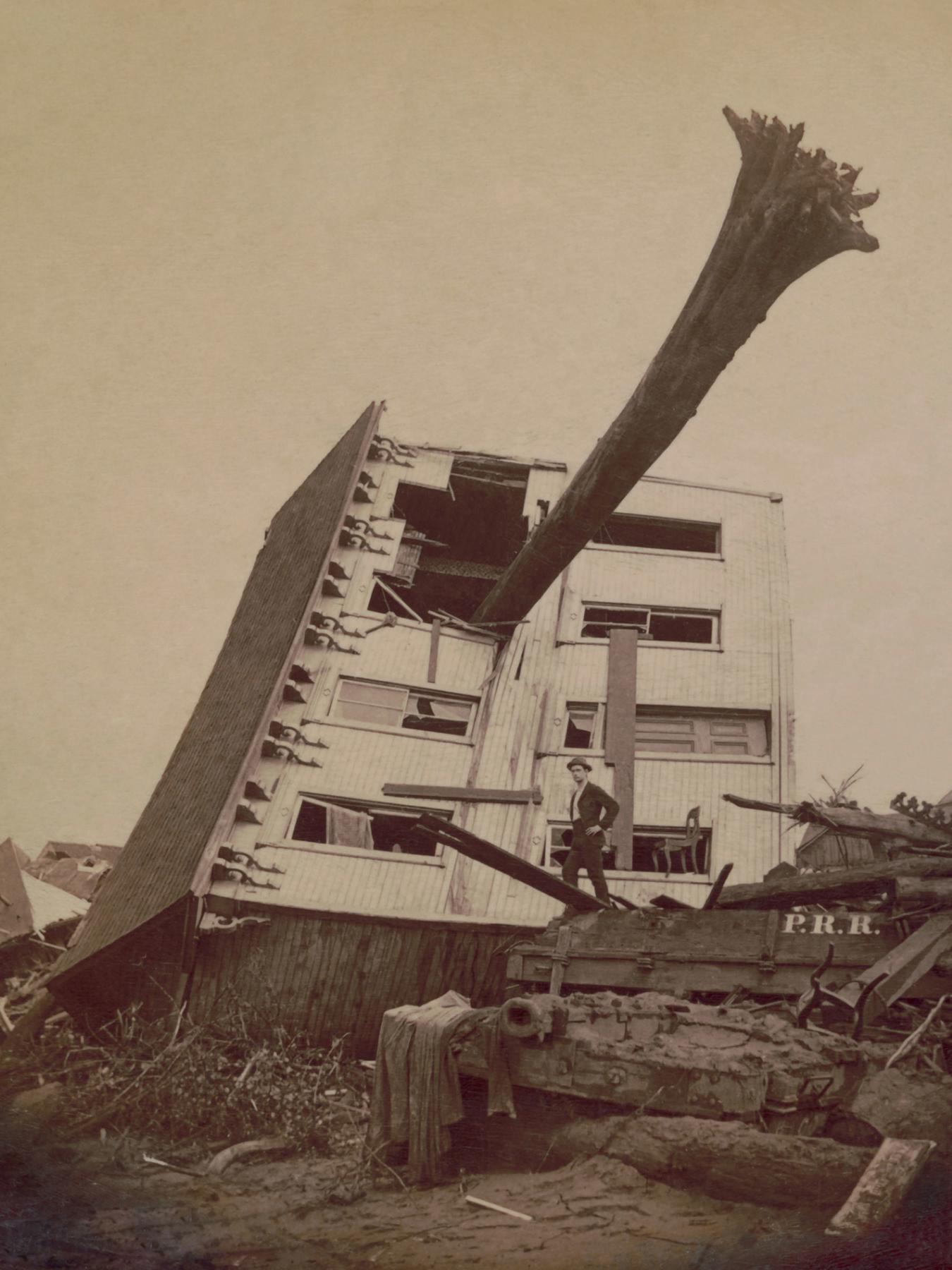 Survivors described a 40-foot high wall of water, churning with bodies, buildings, and even a train hurtling towards them.

Those dire predictions came true in 1889, after heavy rains: the dam was breached, and on May 31, it blew, sending an estimated 20 million tons of water down the mountain towards Johnstown, in what folks in the area still call “the Great Flood of 1889.” Several villages on the route were entirely destroyed. Survivors described a 40-foot high wall of water, churning with bodies, buildings, and even a train hurtling towards them. Johnstown was nearly flattened, and it took years to recover. The men of the South Fork Hunting and Fishing Club denied responsibility, made efforts to aid the town, and fought to clear their names in court (where they were never successfully sued) but many in the region still hold them culpable. But one positive outcome of the flood was the passage of legislation to prevent non-natural usage of land. If the flood happened today, ironically, the Club would no doubt be found responsible, even if not deliberately negligent.

At the Memorial, there are signs to show where Lake Conemaugh was. Stand next to what was the Club’s groundskeeper’s house and look across what appears to be a gentle, rolling valley. It’s hard to fathom that this was once a lake, but your confusion makes a strange sense: it was never supposed to be here.

Ask the park rangers at the Johnstown Flood National Memorial to explain how to get to the South Fork Hunting and Fishing Clubhouse. Find it a couple of miles away in St. Michael, a town that grew up out of the Club’s remains. Many of the so-called cottages—mansions, really—that belonged to members are still in town, some restored, and some spookily decrepit. The Park Service has made slow efforts to purchase them, and now owns the Clubhouse. It’s not often open but you can still walk around the building and peer into the windows. It’s deeply creepy to stand on the porch of the Clubhouse and imagine the water of the lake lapping up almost to the porch. Here, wealthy young women strolled with their beaux, and pleasure boating trips pushed off for a gentle circle around the two-mile-wide lake. There were candlelit parties and dinners for 200, brisk walks in the woods, and beautiful sunsets reflected in the lake. Here, too, the neglected dam gave way, and the lake vanished down the mountainside forever. 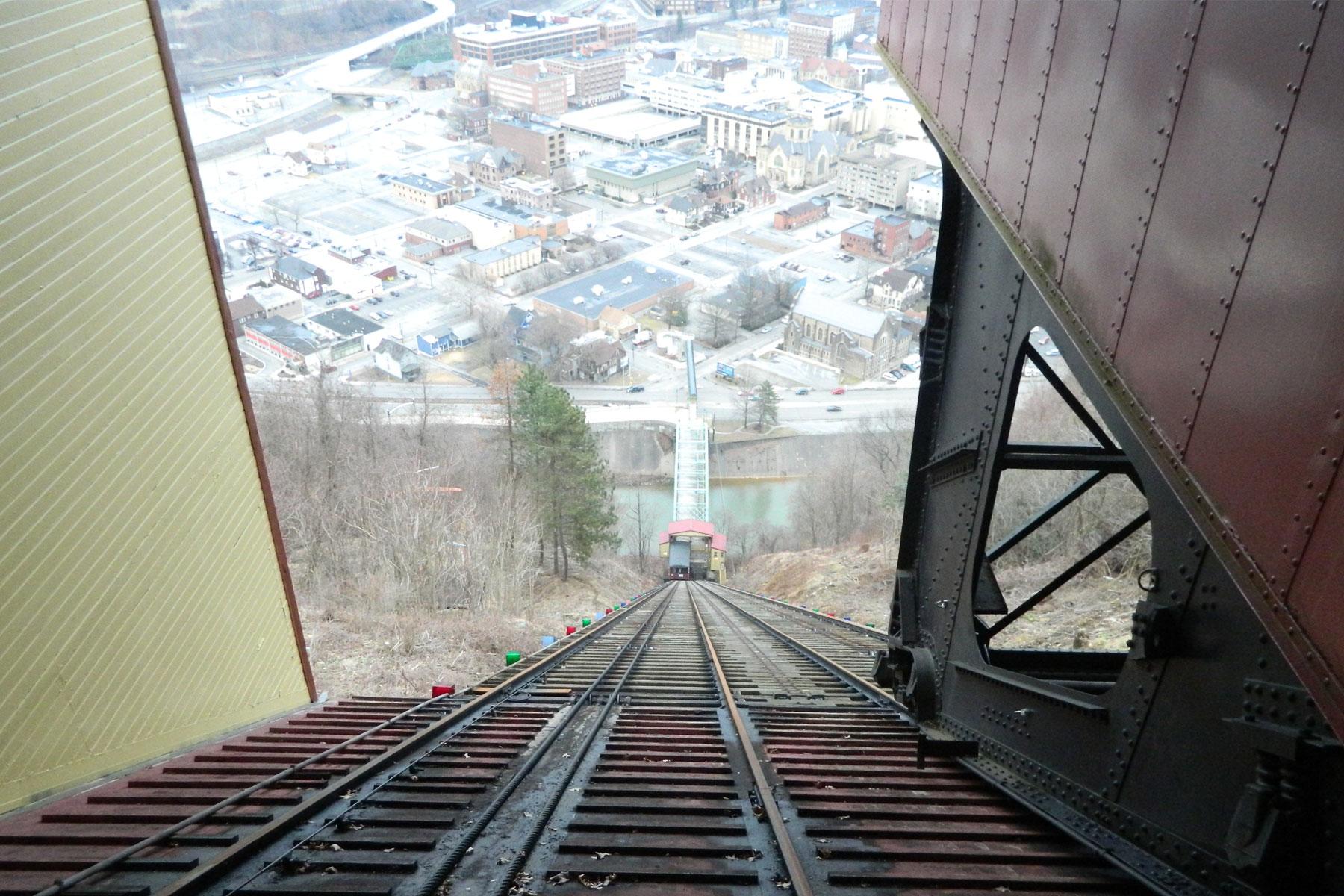 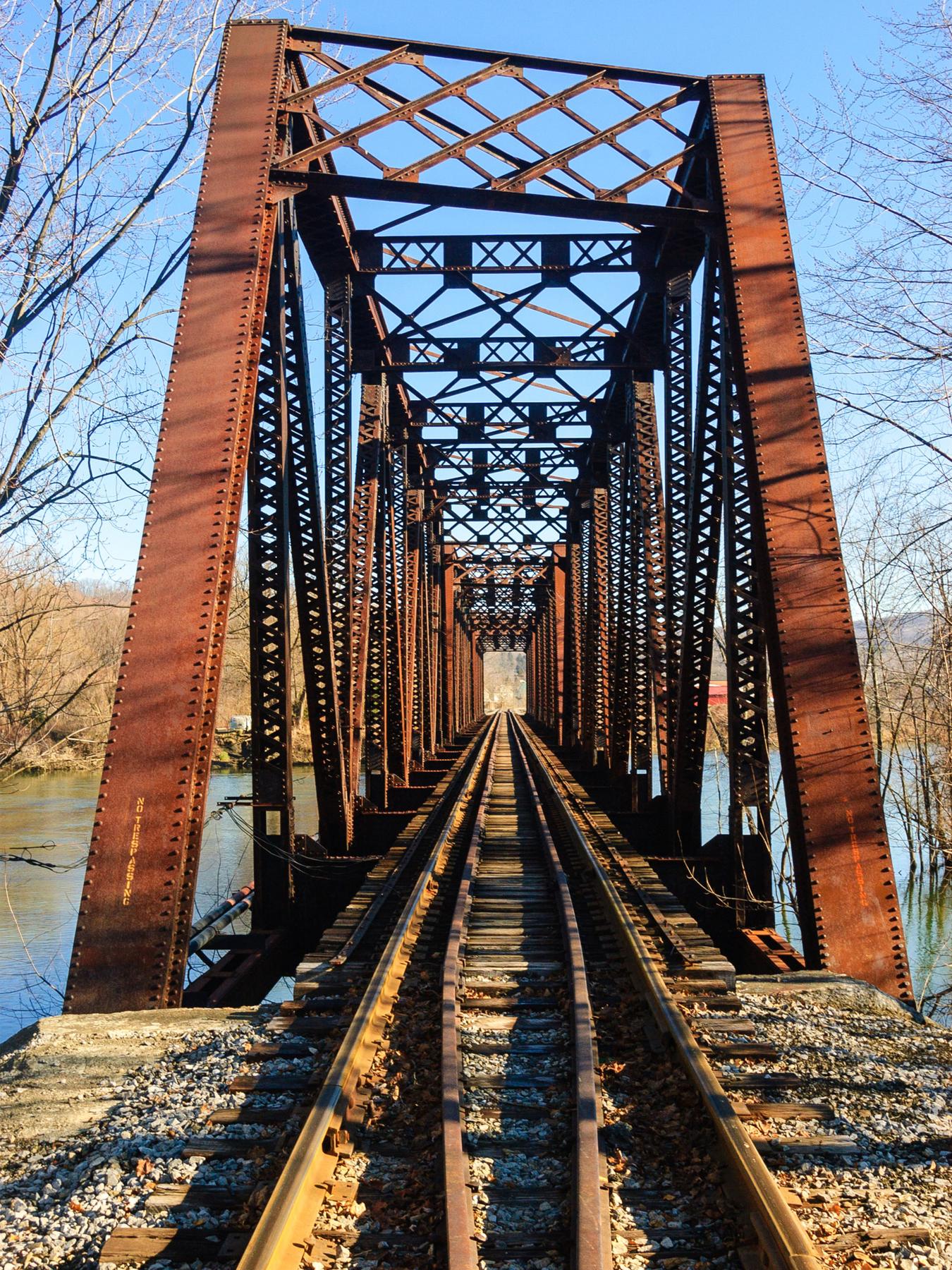 Johnstown has a regional airport, but is also a scenic two-hour drive from Pittsburgh, making it a great day trip when the weather is good. Besides the three sites listed here, there are other worthwhile places to visit in Johnstown: The World’s Steepest Vehicular Incline Plane is a particular old-timey delight, built after the flood when locals showed a sudden interest in living at the top of a mountain instead of at the bottom. There’s also the Grandview Cemetery, where a monument marks where 777 unknown victims of the Flood are buried. When you’ve had enough death and destruction, plenty of chain hotels abound, and there are many excellent local restaurants, including Rey Azteca for delicious Mexican food and O’Shea’s Candy for an amazing ice cream concoction. Enchiladas and an ice cream sundae should help you shake the sobriety of the day.

How Safe Will Eating in Restaurants Be When They Open Up Again?

15 Bizarre Museums to Add to Your Next U.S. Road Trip

Send To A Friend

Please don't close or refresh the page while we are processing your submission
Please be patient, this could take a few minutes.